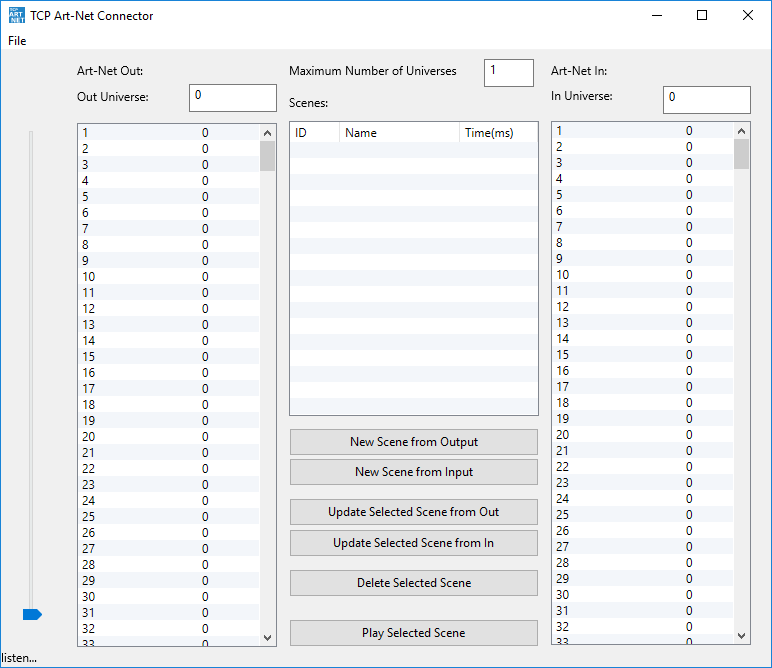 For some devices not direct accessible by V-Control, we provide TCP connectors. A TCP connector is a piece of software that controls the device native and provides a network interface to connect to other software products such as V-Control.

So the TCP connector does all the communication with a device internally and provides a simple control protocol via network to communicate with V-Control. This also has the advantage that devices not available via network now network controllable. The V-Control connector is running on a computer where the device is connected to (typically via USB). This can be the same machine where V-Control is running, but doesn’t have to.

A maximum of 256 universes is supported.

Another useful feature is the ability to capture a static scene. On a button press, the values of all configured Art-Net universes are captured and stored in a scene. V-Control can recall those scenes with a transition time.

In V-Control we added two new Device Variables, CH_State (showing the status of a channel, for example open, closed or Error) and Sent (showing the last command string that was sent to a device). On Windows, the Help Menu now works again showing a pdf Help file with the systems default pdf viewer. On Linux this is still broken, but Linux users find the pdf file in V-Control’s Help folder.

We provided a new Raspberry Pi image for download. This image includes the latest V-Control version, but also a copy of the TCP MIDI connector and the new TCP Art-Net Connector. Because the Raspberry’s processor is not very strong, it is not recommended to drive a huge amount of Art-Net universes, but up to 10 should be possible.

The Raspberry image might also be useful if you need to control MIDI devices that are far away from your V-Control machine. In that case, connect the USB MIDI Interface to the Raspberry and launch the TCP MIDI Connector. Locate the Raspberry near the MIDI device you have to control and connect to it via network. On the Raspberry’s desktop there is a file describing how to set the MIDI and Art-Net Connector to autostart.