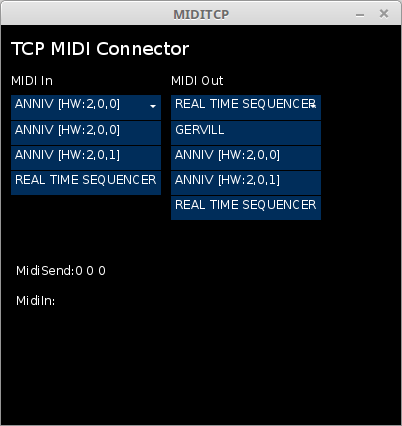 We have now basic Art-Net support. The main usage of then V-Control Art-Net driver is to trigger other devices. It is also possible to use the driver to have DMX output if an Art-Net node such as Kissbox DMX1-TR is used.

For some devices not direct accessible by V-Control, we provide Connectors. A V-Control Connector is a piece of software that controls the device native and provides a Interface (typically UDP or TCP) to connect to other software products such as V-Control.

So if you need to control a midi device for example, and this device is far away from your V-Control machine, then you can use an additional computer with a MIDI interface and the V-Control Connector software installed near the MIDI device. V-Control then opens a TCP connection to this machine and from V-Controls point of view this is the MIDI interface.

There is no native support for USB MIDI devices in V-Control, but we have a nice work workaround. The TCP MIDI Connector interfaces between V-Control and your USB MIDI Device.

Note: This also works with rtpMIDI devices if a rtpMIDI driver is installed on your system.

To connect to the TCP MIDI Connector create a channel with the following specifications:

IP Addres: IP Address of the system with the TCP MIDI Connector (could be 127.0.0.1 if on the same machine then V-Control)

The TCP MIDI Connector is a Java software. On Windows, we provide a package with Java included, this is the reason why the zip file is relatively big. On other platforms you must install Java first.

Launch MIDITCP. In the left dropdown box, select the MIDI input. Use the right box for MIDI output. Once a MIDI Input and Output is selected, the configuration is finished. The software remembers the Input and Output and will use these interfaces net time it starts.

On the V-Control side, now use the TCP_MIDI_Connector_v4 driver.

The driver has a couple of device variables that can be used to fire events if a MIDI message is received.